GB News has launched – and the threat of a right-wing, pro-government 'UK Fox News' is becoming reality.

But for a news channel to be able to operate, it relies on the public's willingness to engage and cooperate. We must deny this biased news channel our support by refusing to play any part in spreading its fake news agenda.

Six things you can do to stop GB News' fake news

Avoid watching GB News and ask others to do the same – there are many alternatives that, whatever their flaws, are not pushing a right-wing ideological project. But it's not just about "if you don't like it, don't watch it" – biased news can still poison our society even if you individually don't watch it. That's why the other steps are necessary too.

If you are invited to appear on GB News in any capacity, whether for an interview or as part of a 'debate', refuse and then let people know why you have done so. Ask others, especially public figures, to back out if they mention plans to appear. You may feel it is important to put your case, but by taking part you will legitimise biased news.

Reporters covering breaking news often pop up on social media asking for permission to use footage or photos from the scene. Say NO to them in a public reply. (This is already often done for right-wing newspapers – treat GB News the same way.)

Twitter encourages you to quote tweet posts you disagree with in order to add a stinging rebuke. Stop! When you quote tweet GB News, even if your intent is clearly to oppose or mock, you are telling the Twitter algorithm that their tweets are 'engaging'. That makes Twitter show GB News' tweets to more people.

If companies you buy from advertise on GB News, then you are funding the channel! Write to advertisers to tell them that is not acceptable and you will no longer use their product unless they stop. Use the Twitter hashtag #DontFundGBNews to get updates on which companies are advertising.

GB News is relying on attitudes to it softening over time, after an initial wave of opposition. That would mean biased news becoming an established part of Britain's media landscape. We must never let biased news become normalised. Keep insisting on the boycott, and arguing with anyone who breaks it.

We can stop GB News if we stand together and deny it the oxygen of publicity by refusing to engage in any way. Their 'culture war' is about attention-seeking for profit – don't give it to them. 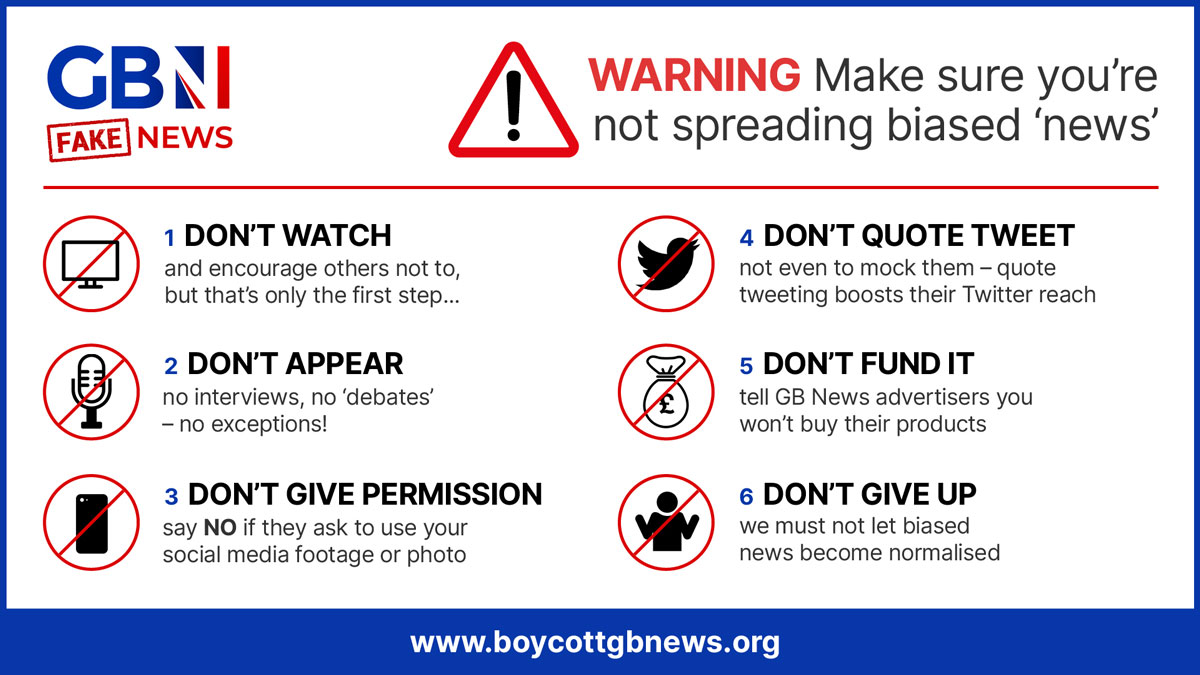